All that social influencer/blogger Elle Darby wanted, was to score a free stay at the famed White Moose Café. Instead, she got into a spat with the café’s owner and was trolled on social media.

Darby had written to the White Moose Café, asking for a free stay at their Lodge, in return for a review. The café owner Paul Stenson, not only made her email public, but also went ahead to criticise bloggers and social media influencers. 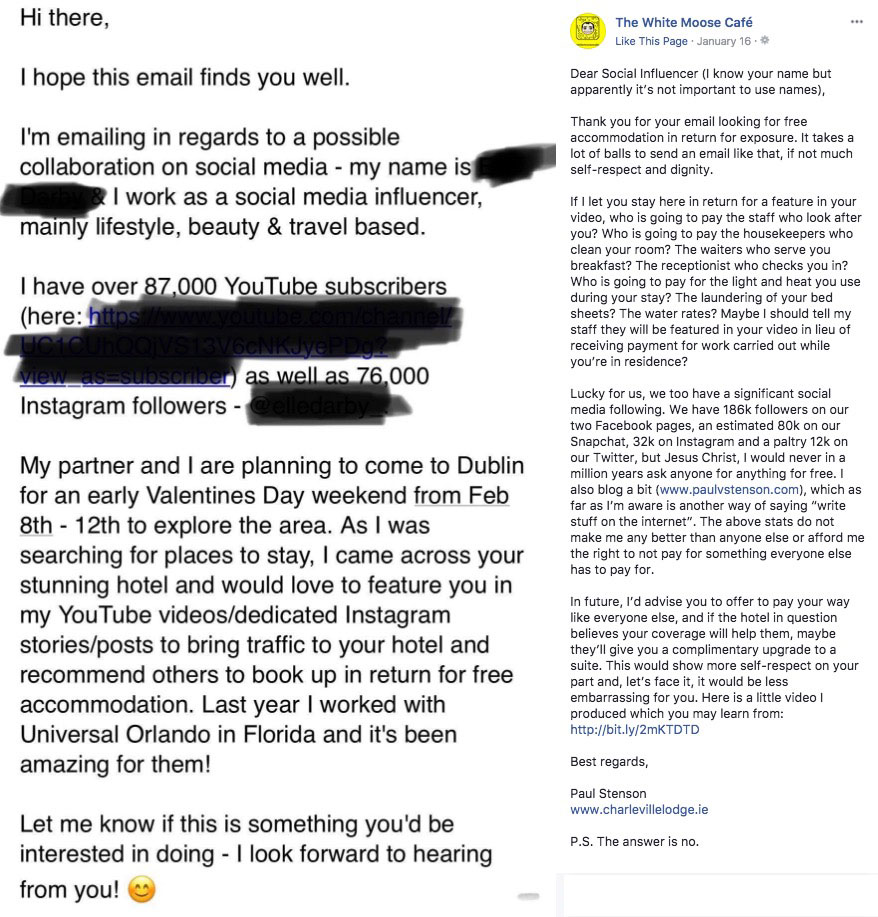 While the café had blacked out her name in their post, Darby claimed that changing the brightness of the photograph made her name visible.

This was the point where both the parties should have had a pint and backed off.

But Stenson went ahead and sent Darby an invoice, claiming that she had benefited from this free publicity.

And did a mock press release to address the controversy.

He also got T-shirts made, which took a jibe at the blogger, and then put them up for sale.

Elle Darby, on the other hand, released a video in which she observed that people over 30 don’t seem to understand the social media economy. Before she could finish typing her response, Darby’s voice got drowned under accusations of ageism.

In her second video, Darby seemed tensed by the trolling she received on social media. Calling it her last statement on the controversy, Darby ends it by addressing all those who trolled her, ““I wish nothing but the best for you.”

The proprietor has a history calling out vegans, breastfeeding mums and those seeking gluten-free food on the cafe’s social media pages.

Most people who haven’t even been to his café follow it on social media, because they find the posts funny.

Elle Darby said in her second video that she is being relentlessly trolled on social media and has even received hate mails. From her distress, it seems that she was not prepared for what came her way.

Trolling and publicly ridiculing is uncalled for. Though I will say here that her statement targeting people of certain age group was uncalled for. However, her observation, if relieved of it’s targeted age bracket, is correct.

Tons of social influencers, use the tactic of offering reviews and mention of their handles, to score free stays and meals around the world. The establishments too, entertain and offer these influencers freebies, to get an access to their social media reach. Maybe for them, the cost of providing a free meal or a stay is way lesser to what they might have to fork out to get equivalent publicity.

But there are some establishments and proprietors, who think bloggers behave like entitled celebrities and demand free stuff, purely because they have a social media following, and a power to influence people.

Whatever be our stand on this specific issue, we cannot accept trolling of a young woman, simply because she propositioned a free stay in exchange of a review. All Stenson had to do was to say no and dust it off. What he has done is to provide trollers a free pass to take a dig at the woman.

Seems like Stenson has finally realised what Elle Darby has been going through. A few hours ago he tweeted:

Some of the comments the girl (who I have never once named) is getting on her Insta are horrible. I don’t condone these comments and I think it’s time people laid off her. Insult me all you like, but leave the girl alone. She fucked up. She’s learnt her lesson. The end.

World would be a much quieter place, if people knew how to say no, without creating a scene.

Also Read : The Question is Not Whether We Do Social Media; it is How Well We Do It.