“What’s the difference between a bar and clitoris? Most men have no trouble finding a bar.” In the world of humour, the clitoris remains a mystery: supposedly small, and so inevitably difficult to locate. “Which dinosaur will never be discovered? The Clitaurus.”

It sometimes seems medical science has been far more interested in the penis than the clitoris. Indeed, up until very recently the number of nerve endings thought to be on a woman’s clitoris was only an estimate and this was based upon research on cows.

But recent research on the actual human clitoris has found it has more than 10,000 nerve fibres – 20% more than previously thought. The new research studied tissue donated by trans men during female to male gender affirming surgery. Tissues were dyed and magnified 1,000 times under a microscope so individual nerve fibres could be counted.

This follows the 2005 research of the Australian urologist Helen O’Connell who become famous as the first person to fully map the clitoris, using MRI scans of women. And it turns out that it’s not small at all, it’s just that only 10% of the organ is visible.

O’Connell has described how her initial medical training used textbooks that never mentioned the clitoris and which regarded female genitalia as a “failure”. So she made it her mission to better understand this part of a woman’s body.

Both the penis and the clitoris are erectile organs. Along with the “small” oblong of the visible part – the glans – the clitoris includes erectile tissue. This engorges with blood on arousal and extends up to 9cm, making it larger than an unaroused penis. That matters because, once aroused, the “bulbs” of the clitoris will extend to touch the vagina and urethra. Pleasure travels. 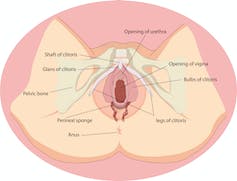 Through its long history, studies of the clitoris were more likely to be based upon the dissection of dead bodies or animals rather than real live women. In 1844 the German anatomist, George Ludwig Kobelt, used dissected clitorises to illustrate not just the visible part, but the internal parts as well, giving a much better sense of its true size.

Kobelt would inject the blood vessels and lymphatic vessels so he could better understand how the erectile organs were supplied with blood. He argued there were many more nerves supplying the clitoris than the vagina, and saw it as far more important for sexual pleasure.

‘A new and useless part’

Kobelt wasn’t the first to realise that the clitoris was a substantial organ. In 1672, in his book, Treatise on the Generative Organs of Women, the Dutch physician and anatomist Regnier de Graaf observed that every female body he’d dissected had a visible one, “quite perceptible to sight and touch”.

He went on to describe “other parts” of the clitoris hidden in the fatty area of the pubis, including those bulbs of the clitoris. He commented: “we are extremely surprised that some anatomists make no more mention of this part than if it did not exist at all in the universe of nature.”

Indeed, before de Graaf, some anatomists had denied there even was such a thing as the clitoris. In 1543 Andreas Vesalius, an anatomist, physician, and author of one of the most influential books on human anatomy, De Humani Corporis Fabrica (On the Fabric of the Human Body), responded to rumours of its existence by dismissing it as “a new and useless part”.

Not everyone agreed, and in 1559 the Italian surgeon, Realdo Colombo, published his De re anatomica (On Things Anatomical). What’s striking about Colombo’s work is that, like O’Connell’s, it was not just based on dissection, but also on the living female body – hands-on experience of it.

Suggested Reading- Women Entrepreneurship Can Uplift Society, So Support Them

But caution is in order here, because all this earlier historical attention on the clitoris wasn’t due to scientists being interested in female pleasure in its own right. It was because people believed that both sexes had to reach orgasm for conception to happen. Pleasure was seen as necessary for procreation, not as something to be experienced on its own terms.

This ancient claim was recently resurrected in a 2019 article in the journal Clinical Anatomy, where the reproductive physiologist Roy Levin suggested that clitoral excitement changes the lining of the reproductive tract to make it more likely that conception will occur.

For pleasure, procreation or both, even though science now knows far more about the clitoris than ever before, it’s clear there’s still a way to go given recent research shows many women are still not able to properly identify their genital parts.

Helen King is a Professor Emerita, Classical Studies, The Open University, published the article first with The Conversation