Amused by a highly sexist matrimonial ad published in The Hindu that went viral last week, a woman responded to it. Her aim was to teach a lesson to the 37-year-old Mysore-based man, who was seeking an absolutely ‘non’feminist’, ‘less than 26 years old’ and a ‘good cook’ as his bride. But she got rape threats instead.

The advertisement sought a “non-smoker, non-feminist, good cook, never been married before” potential wife. This shook the internet world when it was published in one of India’s most prominent newspapers, The Hindu. 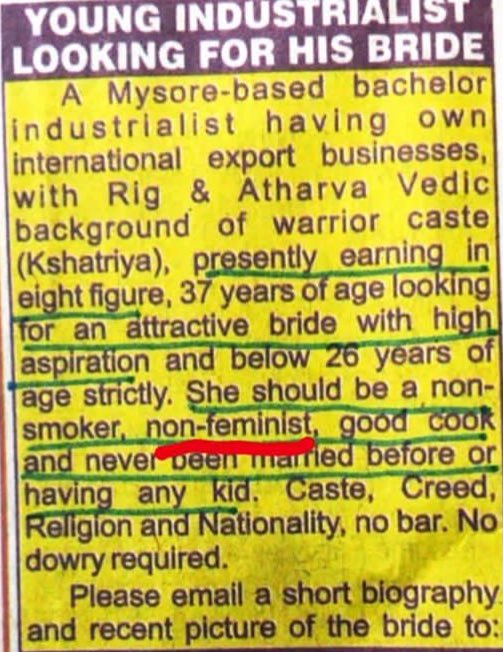 The ad instigated a young lady, who wishes to remain anonymous, to mail this unknown “industrialist” on the given email ID, intending on teaching him a lesson, but sadly it backfired. She got rape threats instead!

And, this is the reply she got:

The reply she received was horrifying, to say the least. The man called her a “ranting feminist bitch”, threatened to “rape all of her holes” and “cut her breasts” with his knife.

When the woman’s friend contacted The Hindu’s Bangalore office regarding this, they said they had no idea about the man who gave the ad. The student even tried to trace the email and it was a ProtonMail client, which is a highly secure and encrypted email service that is protected by Swiss privacy law. It is close to impossible to trace the holder of this email ID.

The bride has to be a 'Non-feminist' & good cook. However, caste & religion are no bar. pic.twitter.com/c2Dw1vbCP9

Also someone has sent a mail to him from a fake id. And thats his reply. So a potential rapist as well. pic.twitter.com/lfuI6SNXsr

However, when the news spread on social media, the issue picked up traction. The Hindu was forced to take note and act.

The issue gained attention on social media and other people too claimed they had started receiving similar messages, allegedly by the same person, with the same language, threats of mutilation, cuss words.