It is true that only 25 percent of the Tech Industry is women employees, and only 9 percent sees women executives. But there are 5 women who have beaten the odds, and are administering reality checks to anyone who thinks Tech is still a man’s territory. Read on to find out! 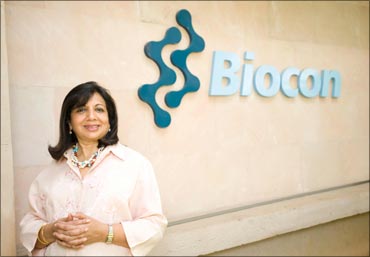 India’s first biotech enterprise- Biocon was founded in 1978. Who expected then that a woman could be the pioneering figure behind it? The only founder and owner on the list, what’s  more- Kiran Majumdar Shaw is even somewhat of a tech protegee- because she founded it when she was merely 25! The company transcended great heights, as it stands today at number 11 in the pharmaceutical sector by market capitalization ($66.8Billion) in India.

Shaw is not only an exemplary for Indians, she is also a globally acknowledged icon. A frequenter of the Forbes’ list of the world’s 100 most powerful women, she was also declared India’s Global Woman of the Year by Asia’s healthcare magazine. Currently, she is also the acting chairperson at leading B-school IIM Bangalore. As the Managing Director of tech-IBM India Private Limited and the General Manager for India/ South Asia (ISA), power-woman Vanitha has been responsible for all of IBM’s sales, marketing, services and global delivery operations in all of South Asia region since Jan 2013.

She’s been dedicated to the company’s global growth for 25 years, through diverse roles at various rungs since she joined in USA back in 1987. She is also part of a special team ‘IBM Industry Academy,’ which only seats experts, to work on IBM’s industry thought , leadership and brand value. Narayanan is at the heart of the company’s various special initiatives to bolster diversity and create a strong women’s leadership pipeline.

Aruna Jayanthi is the CEO of Capgemini India-  a global IT giant. She assumed this role in January 2011, after an exemplary performance as the Global Delivery Officer for Capgemini Outsourcing, where she is credited to have boosteded quality, productivity and profitability of Capgemini’s outsourcing operations worldwide. In her career, she has worked in Europe and North America. The dynamic leader still likes to travel avidly to stay abreast with global market trends.

This ex IITian is the Chief Technology Strategist of Cisco systems, and is at the heart of CISCO’s major treads and moves around the globe. She is on the way to the very top of the company, if rumors are to be believed. She has also served as the CTO at Motorola before she took up Cisco. Padmasree has the impressive distinction on this list of being a Twitter Celeb- she tweets regularly to 1.2 million followers.

Kirthiga Reddy
Picture By: The Hindu

Facebook is focusing its energies on the massively potent Indian markets, and have chosen Kirthiga Reddy to lead the charge as the Head of Office. Reddy was with Facebook right since its inception in India in July 2010. She set up the Indian office in Hyderabad, and is in charge of handling marketing, strategies and public relations with Facebook’s growing Indian subscriber base. She has also held executive positions in the Silicon Valley circuit with big names like SaaS-based Consumer Security business unit and Phoenix Technologies, Motorola, Silicon Graphics and  Booz Allen Hamilton.