Write and director Tahira Kashyap Khurrana is an author, and a mom to two. Tahira’s writing debut started with her novel ‘I Promise’, which is a story about a perfectionist. She got married to Ayushmann Khurrana in the year 2011 and are blessed with two children, Virajveer and Varushka. Ayushmann’s biography, titled ‘Cracking The Code’, is co-authored by her along with Ayushmann Khurrana. In 2018, she directed a short film called ‘Toffee’. 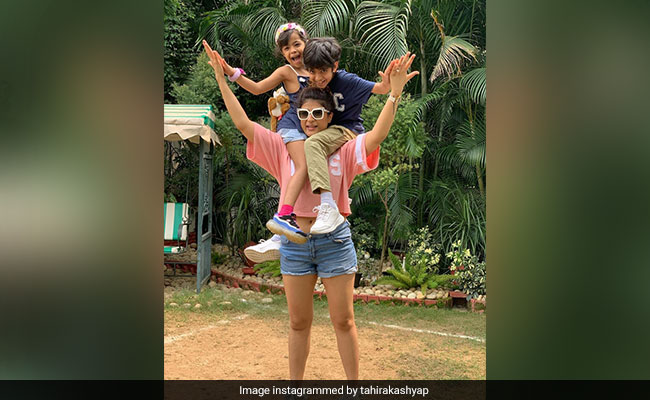 Tahira Kashyap Doubled Up As A Tree For Her Kids Virajveer And Varushka.

Motherhood has its challenges. And its hormones. Opening up on the low phase of her marriage with Ayushmann, Tahira Kashyap said, “I was this crazy, insecure, pregnant person when ‘Vicky Donor’ happened. That was the worst phase.” “I [was] crazy on my hormones because I was pregnant,” she added.

In 2018, Tahira was diagnosed with breast cancer.  She came back to work after months of treatment and she frequently posts updates on Instagram, promoting cancer awareness. On World Cancer Day she took to Twitter to share a picture where she bares her back and her soul. What Kashyap and many more women who embrace their post cancer bodies openly do, is very important. It gives courage to other women who are fighting similar battles, but are unsure of whether the world or their loved ones will accept them or not. She shared that a family and husband’s support is necessary for women, who are fighting against breast cancer and her husband has been supportive in her journey. She did her directorial debut with the movie called ‘Sharmaji Ki Beti’.