Who Is Ladeeda Sakhaloon, The Face Of Jamia Protest Against CAA

Ladeeda Sakhaloon is originally from the coastal city of Kannur in Kerala. She is currently pursuing a Bachelors degree in Arabic, first year, at Jamia Milia Islamia.

As the protest against the Citizenship Amendment Act across the nation has reached its crescendo, some students have surfaced as the face of resistance. One of them is Ladeeda Sakhaloon, who long with Ayesha Renna,  has become the face of protests against CAA in Jamia Milia Islamia University that became the focal point of the anti-CAA student protests in Delhi. Sakhaloon has been a subject of admiration and controversies in equal measures.  But one thing is for sure, she has our attention.

Ladeeda Sakhaloon is originally from the coastal city of Kannur in Kerala. She is currently pursuing a Bachelors’s Degree in Arabic, the first year, at Jamia Milia Islamia. While Ayesha Renna is a second-year MA History Student at the same University. Sakhaloon already has a Bachelor’s degree in Economics from Sir Syed College in Taliparamba, Kannur. In a telephonic conversation with India Today, Ladeeda said that her father Md Sakhaloon is a salesman and her mother is a teacher at a Madarsa. Her real surname is Farzana.

Ladeeda Sakhaloon finished her schooling from Deenul Islam Sabha Girls Higher Secondary School in Kannur. This is the only girl’s English medium school in the city. According to an interview with The News Minute, Sakhaloon claimed that she is married and her husband is an official member at Student’s Islamic Organisation in Kerala.

Sakhaloon has been a social activist even before moving to Delhi. She is an active member of SIO which is “an ideological organisation working in the country for preparing students and youth for the reconstruction of society in the divine guidance,” according to its website. Sakhaloon has been raising her voice in the support of Islam and rights for education. In 2017, she reportedly presented a paper on religion and liberalism titled, Conversion: Religion in controversies and limits of liberal discourses,” at a public discourse organized by SIO.

In an interview, Sakhaloon claimed that she is married and her husband is an official member at Student’s Islamic Organisation in Kerala.

Student Protests against CAA at Jamia

Ladeeda Shakhaloon became the face of student protests against CAA in Jamia, which later took a violent turn. She came to the surface of the chaos when a video of her and Ayesha Reena went viral on social media. In the video, they were seen protecting a male student against the Police and challenging them.

She told Outlook, “We started the protest from our (girls’) hostel at around seven. For half-an-hour, there were just four of us,” Later when the number increased, they went to other hostels and mobilized more students. Addressing the crowd, Ladeeda said, “If we don’t protest, who will? My parents have always said that you must fight injustice. When my father saw that photograph, all he said was, ‘You are on the right path.” According to the reports in Times of India Ladeeda and Ayesha were the members of the protest committee against CAA that was formed in the campus. Furthermore, the report claims that the two women took the beatings of the police’s lathi to save their senior Shaheen.

In another picture that emerged from the protests of December 12 and became viral, Shakhaloon is seen standing on a wall along with Ayesha Rena and Chanda Yadav, wearing a hijab and addressing the huge group of student protestors in the campus. The women reportedly raised slogans of ”CAB, tera naam Islamophobia”, “Sanghvaad ki qabr khudegi, Jamia ki dharti par”, “Neel salam, assalam”, and “Intifada, inquilab”.

According to an India Today report, Sakhaloon has been very vocal and radical in her views and ideas about Islamic rights. Her posts on social media got her enmeshed in many controversies and consequently, her Facebook page and the posts were deleted. In a post on December 13, Sakhaloon defended the slogans of “Allah Hu Akbar” raised at the CAA protests in Jamia that attracted much criticism based on secularism. Replying to all the objections on the slogan, she said, “You might be in a hurry to prove your secular loyalty, but we are not… We have abandoned your secular slogans long before.” 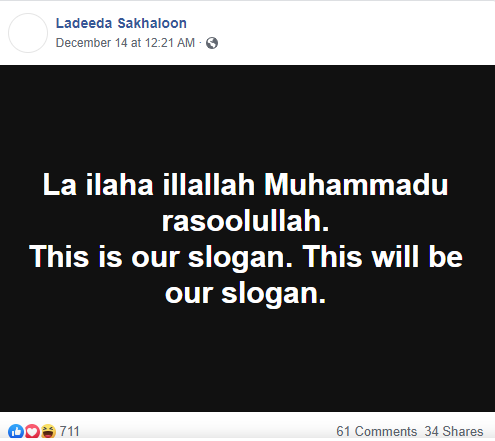 In another post of December 11, Ladeeda recalls some of the historic battles fought by Muslims with Allah’s divine intervention against the ‘Kaafirs’ and claims to “learn about our ‘Jihad’.  However,  all her earlier posts have been deleted and she has made a new account on both platforms.

Sakhaloon has defended the slogans of “Allah Hu Akbar” raised at the CAA protests in Jamia that attracted much criticism based on secularism. Replying to all the objections on the slogan, she said, “You might be in a hurry to prove your secular loyalty, but we are not… We have abandoned your secular slogans long before.”

In a tweet and interview, journalist Barkha Dutta came forward in defense of Shakhloon and Renna, labelling them as the sheroes of Jamia Protests.

In a viral video from #Jamia we saw two young women save a male friend from police lathis by giving him cover. We also saw the same women standing atop a roof raising hands in another viral image. I meet Ladeeda Farzana & Ayesha Renna, sheroes of Jamia & Shaheen whom they saved pic.twitter.com/q8qfvIDMFT

"They tell women to stay at home and not speak up, but speak up we must. Nobody can take our voice"- 22 year old Ayesha Renna & Ladeeda Farzana -Sheroes from 2 viral images from #Jamia, one in which they save their male friend from lathis, speak to me about Women Leading protests pic.twitter.com/xc2jvO4iUZ

On the other hand, Rupa Subramanya, a Mumbai-based economist and the author of Indianomix: Making Sense of Modern India, expressed her disappointment and called Ladeeda’s claim of not refraining from the slogans of “Allahu Akbar” and “Insha Allah” a sectarian resistance to CAA.

Recently, on December 21, Ladeeda Sakhaloon was invited to join the public meeting and protest in Hyderabad at Darussalam, by Majlis-e-Ittehad-ul-Muslimeen (AIMIM) MP Asaduddin Owaisi. According to ANI, in the rally, Ladeeda said, “We all know that our fight for justice is not complete without meaningful solidarity from people of other faiths, ideologies and communities.”

Further, on December 22, which marked the tenth day of students protests against CAA, at Maulana Azad National Urdu University (MANUU) in Hyderabad, Ladeeda Sakhaloon and Ayesha Renna also joined the protests. Addressing the gathering, Sakhaloon appreciated all the participants at the protest and said, “Such protests all over the country show the power of the student community. This has created fear in the government,”